Written by Daniel Kaas Nielsen
Updated over a week ago

You have received 2 packages.
One containing the Scanner itself, and another with a cradle that's used for charging and holding the Scanner.
We start by connecting the cradle, with the cable that were included in the box. It's a cable with USB in one end, and a internet cable in the other end. 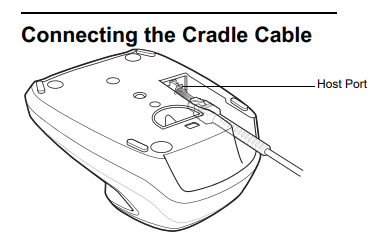 Now put the scanner in the cradle.
The Scanner starts to make noices, and blink yellow at the top.
Let it stand, and charge for 5-10 minutes.
Thereafter scan this barcode:

The Scanner now starts to beep and blink.
When that's stopped, open Shopbox app.
Press on the 3 white lines, in the left-hand corner.
Select "Settings".
Select "Scanner settings".
Press on the update logo on the left side.
Now press on "select a scanner" and choose scanner called "Symbol Bar Code Scanner::EA".

When that's done, press on "Save".
There will appear a blue box saying "Scanner Connected succesfully".
And now it's ready for use in Shopbox.

Did this answer your question?